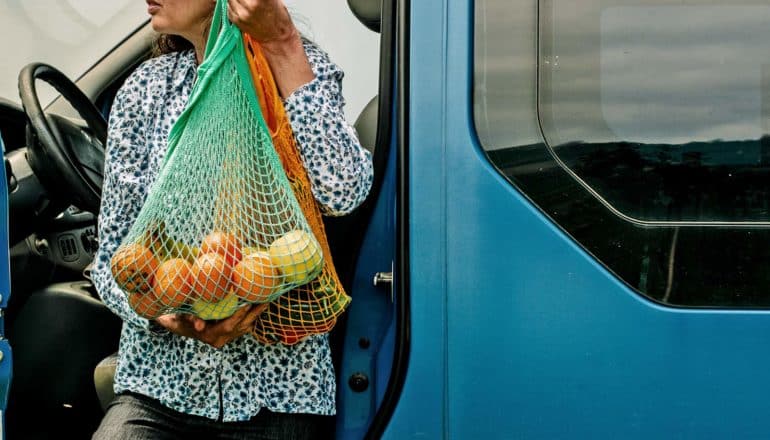 Preliminary simulations suggest the possibility of repurposing the water and carbon dioxide from car exhaust systems to grow food.

The advance would reduce carbon footprint of roadway traffic and help the agricultural industry feed a growing human population, according to the new study.

“I started reading the related literature and did simulations of what was possible,” says Maria Barrufet, professor in the petroleum engineering department at Texas A&M University. “This is entirely realistic. Several proposals have already been written for large trucks and marine vehicle applications, but nothing has been implemented yet. And we are the first to think of a passenger car engine.”

The impact could be enormous. In 2019, an estimated 1.4 billion vehicles were in use around the world. An average passenger car in operation can emit about 5 US tons (approximately 4.6 metric tons) of CO2 per year, meaning a significant amount of greenhouse gas is going into the environment. One car’s fuel combustion also creates a large amount of water per year—about 5,547 gallons (approximately 21,000 liters).

Elena Castell-Perez and Rosana Moreira, both professors in the biological and agricultural engineering department, know this wasted CO2 and water could be put to good use, especially in cities.

Recent expansions in US urban agriculture rely on industrial greenhouses, which use an artificially enriched atmosphere containing up to three times the amount of CO2 in normal air to improve plant health and harvests.

These urban farms would greatly benefit from a steady source of free, reclaimed CO2 and water from car exhaust as they currently purchase and use almost five pounds (over 2 kg) of CO2 and nearly six gallons (22 liters) of water to grow just over two pounds (1 kg) of produce. And these numbers don’t include the water and CO2 needed for post-harvest food processing and dense-phase pasteurization.

How would it work?

The researchers outlined how the integrated device could work. Heat from the engine could power an organic Rankine cycle (ORC) system, essentially a small, closed unit containing a turbine, heat exchangers, condenser, and feed pump that works like an old-fashioned steam engine but on a much smaller scale, and with far less heat needed to produce electricity.

The ORC would power the other components, such as a heat-exchange system, that could cool, compress, and change the CO2 gas to a liquid for more compact storage.

“Years ago, we didn’t think we could have air conditioning in a car,” Barrufet says. “This is a similar concept to the air conditioning that we now have. In a simple way, it’s like that device, it will fit in tight spaces.”

Preliminary simulations are encouraging. No significant reduction in a car’s engine power or increase in its fuel use is predicted. Any potential corrosion in the heat exchange system could be addressed with the use of new coating materials.

Theoretically, vehicle owners could turn in full cartridges of CO2 and water at reclamation centers just as people bring in aluminum and steel cans nowadays. Or drivers could even use the CO2 and water in greenhouse systems of their own or within a community, provided the CO2 was used responsibly and fully absorbed by the plants.

Questions remain, though, such as how big these cartridges would need to be, how the water would be handled since it cannot be compressed, and at what weight would the stored CO2 and water affect the car’s performance.

The researchers are actively seeking funding to continue their work. While research is already in place in national labs and industries on improving devices for large-scale CO2 capture, nothing currently exists on a scale this small, so it could be 10 years before they have something ready for testing.

The greatest challenge could come from assembling a team to conduct the research. The components for the device already exist in some form but will need a cohesive team of engineers from different specialties to redesign them to work together in such a confined space.

“All of these independent ideas and technologies have no value if they cannot connect,” Barrufet says. “We need people concerned about the future to make this happen soon, energized students in petroleum, mechanical, civil, agricultural, and other engineering disciplines who can cross boundaries and work in sync.”

The paper appears in the journal Circular Economy and Sustainability.

The post Could we use CO2 from car exhaust to grow food? appeared first on Futurity.